Hodden Grey was invented on a day like today. Horizon to horizon overcast with the hue of dirty dishwater. Nevertheless, I left the house early so I would have an opportunity to get used to driving the Landy again on a quiet highway after a break of several months.

It's a surprisingly quick run to Forfar. 25 minutes door to door and pass the sites of 3 Roman forts. You're at Finavon before you know it and from there it's a stone throw to the turn off.  Reid Hall lies on the edge of town, opposite Tesco. Easy to find with ample parking. Leaves few excuses not to go. 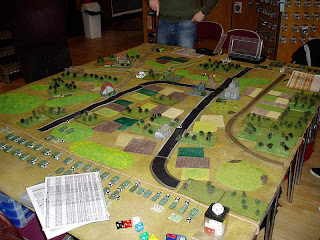 1/200 Modern Command Decision Game
Arrived at 10.30 to find the show busy with a good buzz going on. The number of trade stands was noticably less than previous years. Marked absences were Dave Thomas and Scotia/Grendel.  Most people I spoke to noted that Dave Thomas wasn't there. Last year, every trader seemed to be selling Wargames Factory or Plastic Soldier Company and it was a pleasant change not to see one single box in evidence this time round. 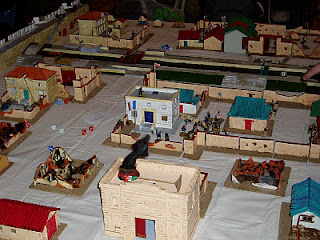 55 Minutes at Peking
I'd hoped to pick up scenery but there was simply nothing on sale or in the Bring and Buy to support any of my main interests. My total purchases of the day, hotdog with onions and two cups of tea aside, were a bottle of Vallejo Matt Varnish and, as they were there, some packs of Mutineer Miniatures' new 20mm Modern Africans to kickstart Cold War Pulp. So I bought duplicate packs for Maff too.

Mutineer Miniature Modern Africans
By 11.30 I was starting to fade. The noise and buzz coupled with busy game tables was more stimuli than I've been used to over the past 5 months. I chatting with Hugh and Jefferey from Aberdeen amongst others, plus grabbing a quick word with Sholto who was immersed in his 55 Minutes at Peking game.

Today was more about re-establishing my wellness and independence than being a hobby day. From that perspective it worked well, but by 1pm I was on my last legs and headed home. Now, looking forward to Targe at Kirriemuir next month.