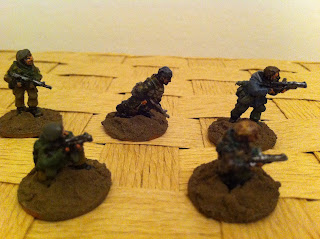 There was a request from Christopher for a better picture of the CAF figures from our most recent game; they are of course up in sunny Kincardineshire but here, at no extra charge are some Free Taffs who I suspect are some of the same ex-Hotspur figures. These are the very lads who gave the SAS a bit of a suprise on the road to Llandeilo back in a very early W79 game
Back row left to right, Royal Marine M&AWC, Falklands SAS x2 - the one on the right is allegedly wearing a fashionable blue parka and is in fact the character figure of Commandant Owen Owens, the one man headshead of the Armed Forces of Free Wales.


Front left, M&AWC with "66" but cut about a bit and painted as an M79, another SAS.
A very eclectic collection of kit, weapons etc and probably equipped a bit too good for the Free Taffs at this point in the Winter of '79. That said, at that time these guys were the only Free Taffs in every way. Their berets are a greyier shade of green, not the dark, almost Royal Marine green beret that my later Free Taffs wear. If you think of Wales, you may think of red for the Dragon but that colour is already taken by a rather possessive group of gentlemen from Aldershot who have highly aggressive tendencies.........

Once finished, I'll put the rest of the Free Taffs on parade, along with their Royal Marine allies, plus the now famous Free Taff gunned up Dingo scout car and a chap with an M16 and a ranger cap who is apparently an "advisor" and who anwers to "Clint".