But you didn't take a peep in their artillery room....... 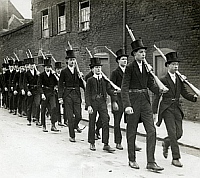 Inspired by Paul Weller's classic 1979 anthem, this week's project is slightly tongue in cheek - a 'platoon' of the Eton Rifles (altogether now! "Eton Rifles, Eton Rifles"). A pro-emergency government auxiliary force based on the Eton College Combined Cadet Force. In our Winter of '79 scenario we'll include 'Old Boy' platoons and I already have a couple of games in mind once Rolf's Urban Meltdown Brits with SLRs become available.

The Eton Rifles have been sponsored and newly equipped with the latest military hardware by a consortium of old boys led by the Chairman of British Pastoid Chemicals, Sir Marcus Dixby MBE. Sir Marcus is also an Executive Director of Fabrique Militair and is known to have significant holdings' in Executive Solutions, an organisation described in it's promotional literature as a private armed 'security' company. 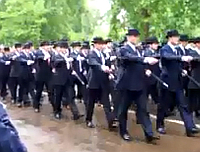 Eton Rifles 'Old Boys' march in Hyde Park
to demonstrate support for the emergency military government.
This is a bit of fun & light relief, so bear with me. The figures chosen for the Eton Rifles are, well, not an obvious choice for 1979, but you'll see later in the week. I'm starting on them tomorrow afternoon, breaking off for the Whiskey Sierra Three Down game tomorrow night. Aiming to have the first Eton Rifles finished on Thursday and posted to the blog before the weekend.