It's not just filibusters; scalphunters and cherokee Indians also feature. It's been quite entertaining seeing what can be dredged up on eBay; though I did have to bite the bullet and buy some packs direct from Foundry. Next stop is indeed some Mexicans, I'm torn between Boothills and Artizan.

But..............as some of you may recall, I did a bit of buying at Crusade. I've now got around to painting my Argie SF and Marines. I just did a caradon granite basecoat, a good dry brush of olive green, dark grey assault vests, berets and wool hats, lighter olive kit and a badab wash. Fast and dirty paintjob really.


Here they are in the paintstation: 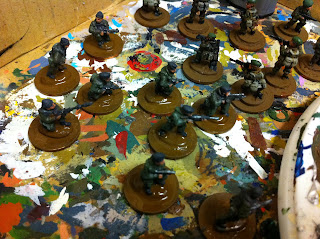 I also bought on eBay a disused siding diorama and so a quick game was born as an elite squad of Argie SF try to capture the vital coal supplies of the Falklands Light Railway. Oddly, subsequent googling revealed that there WAS such a railway; google Falklands Camber Line - it even ran to Moody Brook. Until the 1920s.

And so back to 1982 as some Royal Marines spot some shadowy figures creeping up through the rust covered sidings........