The wrong side of the tracks 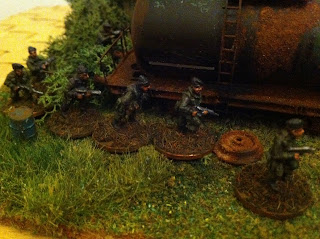 Its penguin-fart AM and a file of Argies creep towards Moody Brook using the Camber Light Railway sidings as cover. 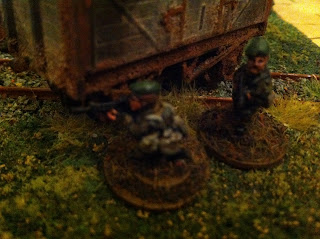 Meanwhile, the Moody Brook Garrison - aka Marines Dave and Ron - have taken cover by a historic piece of rolling stock. 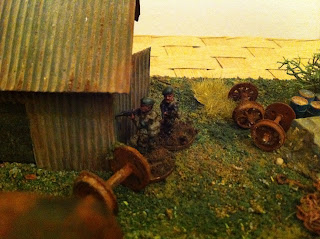 And, just to their North, Marine Pete and Cpl Baz are adding their own Para insulting graffiti to the seagull guano on the old coalshed. 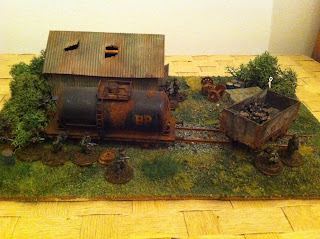 The Big Picture, the Argie Rupertino is out of shot to the left; barely encouraged, the SF creep forward slowly......but are rumbled by the Booties. Dave drops the lead gaucho and Ron lets fly with his sterling; argie return fire is innefective and Pete takes out an argie on the far side of the tanker - Baz legs it to the tanker and drops another. 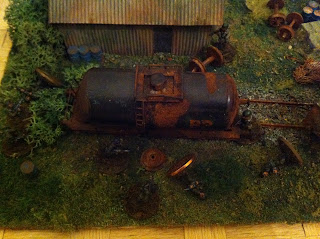 The seagull's eye view; with three men down the Argies decide that they don't need the scrap metal that much and call it a day for now. The Booties find a new ambush position and wonder how the lads at the Govt House are doing......

Freshly painted ex Hotspur argies from Stonewall and veteran Pltn20 Bootnecks. I like most of the argie SF / Marines but some of the figs are a bit tired in places; faces seem a bit craggy. I didnt like the GMPG guy then and I dont now - that said the guy with the SMG is ace as are the crouching figures - though the mags on the other SMGs are negligible. Platoon 20s? Good old figs, love 'em, solid castings that do the job.