Saturday morning. Six something. Curtains closed. Jetlag. Supping a freshly brewed tea. Watching The Professionals followed by The Sweeney on TV. Can't ask for a more fitting welcome back to the UK and home!

If you noticed that I've been off the grid for the past three weeks, well done! You win the Jack Regan "we've haven't had any dinner yet, so unless you want a kickin'..." detective prize.

The complete and utter break with everything I know, being immersed in an alien environment and culture with such different religions and customs, was just what the Dr. had ordered. I laughed with joy as the Indian Ocean waves broke around me making me feel human again, and just standing in a rainforest, in the middle of a tropical downpour became an incredible, soul cleansing experience.

Heraclitus opined that "No man can cross the same river twice, because neither the man nor the river are the same." And that I think, also applies here to the Indian Ocean, where I crossed as one man and came back as another.

There will be a short respite for Easter before we return, kicking in doors with Sterlings blazing, to the events of the Winter of 79. 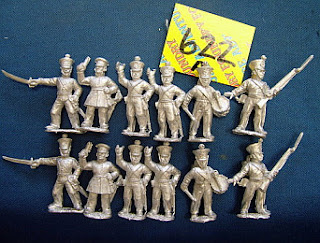 In the meantime, I'm getting together a collection of 28mm Chartists and government forces from a variety of sources for Winter of 1839.

Thanks to that nice Dave Thomas bloke, I managed to pick up several packs of OOP Foundry 1839-42 Opium War infantry. Whilst this set of command figures on the right was just half what they would have cost from Foundry themselves and gives me all the command I need plus some extra standard bearers who can be converted into civilian Chartist banner bearers.

I'm also looking at getting a couple of sets of Brigade Games new Napoleonic RN Landing Party  packs which could easily be made proxy for armed Chartists with only a little conversion - giving them 'top hats' - but could even leave them as they are, as their R.Navy hat look similar to the popular 'John Bull' or coachman's hat. Nice looking figs regardless.