A bit of local history and breaking news..... 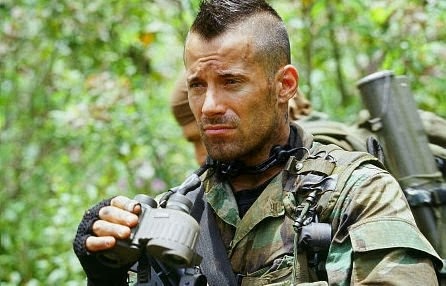 Price: you got eyes on Soap?
Soap: Yeah Boss, its a Norwegian Blue, lovely plumage....

Off duty, Soap is a bit of a twitcher but, meantime inside the headshed shipping container, FOB Crimea....

Soap: OK, blokes listen up. The Boss wants you all to have some background on the history and culture of our TOE. So, question one - where are we?

Soap: Yeah, right, Baz, very literal answer, now shuttit. We are at the SE tip of the Epirou Peninsula in the Joint Republic of Hav-Trebizon aka JRHT. Hav was formerly the Serene Littoral Republic Of Hav, a bit of a Venice wannabe, except it got taken over big time by the Ottomans once they banjoed Constaninople. The Exarchate of Trebizon put up a....Ron?

Ron : Soap, just what the heck is an Exarchate?

Baz : Easy, its a used to be archate.

Soap : Good try Baz but nul pointes. Trebizon put up a bit more of a fight until the third Duke in a row  was flayed alive by the Sultan, at which point they all got the message. Both countries got Independance in 1903 and again in 1921 and 1948. They then fought a brief war in 1975 after which the UN told them to be good boys and play nicely.

Hav was more NATO oriented while Trebizon was dominated by the USCS - the Union of Slavikovan Communist States. That explains why the Hav lads have NATO or US kit and the Trebs have AKs and look vaguely WARPACT.

As you know things fell apart for the comrades and Skavikova isn't what it used to be. That's bad news because previously they were predictable and now they are as predictable as a rabid dog on acid. Which is where we come in. There are lots of local tensions here but by and large the Havs and Trebs aren't shooting each other - though it gets a bit rough on match days. The Havs are urban, very businesslike and love to haggle. The Trebs are more rural and think they are getting ripped off - which is usually the case. They call each other polis and agris which is Greek for town and mountain. .....any comments? Piotr,  no need to put your hand up.....

Baz - it's round the back of the cookhouse mate

Piotr: it is best not to mention goats. We know that the Continental Hotel is owned by a former KGB colonel who is still connected to Moscow.

Joern: the security  manager of the Royale Casino is ex Stasi and most of the casino girls used to be "sparrows"....

Ron: HEY! Those babes are HOT!

Leif: it's a coincidence Ron; do not worry yourself.

Price: OP ON! Ops room NOW! The Italians have lost a Special Envoy. OP ON! Soap ?

Soap : who snatched him Boss?
Price : National Honour, from a cafe in Norovogrod.
Soap : NH? They're nutters! They want a return to the 1842 borders and war with Turkey! Why have they grabbed this bloke? Is he a spook?
Price: No, he's a full civ. Italy is a swing player on the big EU vote this week. Italy vote against and Bellini is sent home in very small pieces. Like the advert says, simple.

Price: Get an action on drafted NOW! Chinese parliament in 15. Wheels up in 60..... Move it! Bloody meerkats.
Next up: The Bellini Op, briefing and AAR ETA this weekend.... Cheers Maff
Posted by Master Chef at 12:57