And now over to Bob Langley with a report on today's main news, the terrorist hostage taking in East Whittington.


"Good evening, here in East Whittington, a town is in shock and chaos as the events of today sink in. At 12.15 a van, apparently belonging to a catering firm pulled up outside the Town Hall; a dozen or so people went in carrying boxes of food ordered for a buffet. A commissionaire on the door asked a question and was promptly shot by one of the terrrorists. As the gang swarmed into the Hall, the local Police were alerted by a call, believed to be from within the Town Hall. Officers, some of them armed arrived quickly and it seems that an attempt was made to rush the Hall. We have no details of casualties but ambulances have been leaving the scene all afternoon. Large canvas screens have now been put up closing off the area from public view......and er yes, here is DCI Hacker, his arm is in a sling, and a colleague, I think they are going to make a statement...... 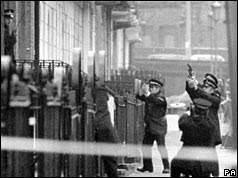 "Right. My name is DCI Hacker and I have a short statement. This afternoon, a group of terrorists seized East Whittington Town Hall and took hostage some ah 15 members of the Association of Local Council Chief Executives. The East Whittington Constabulary intervened and a firefight developed on the steps of the Hall. Several brave officers were seriously wounded but we believe that the terrorists also suffered losses. They are now holed up in the Hall and we are containing the situation. I will now hand over to Mr McTavish of the Home Office." 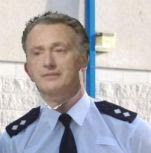 "Thank you DCI Hacker. We have received the terrorist's demands which are under review. The situation is that Her Majesty's Government does not negotiate with terrorists. We are, however, actively seeking the release of sick and injured personnel. We will make further statements in due course. Thank you, that is all for now"......

This is Bob Langley, for BBC 1 News at East Whittington"