.
Stopped in by Hobbycraft on Thursday evening and picked up a box of Italeri  IT6127 1/72 Stone Walls for six pounds something. Note that price varies by up to £1 depending on retailer.

Manufacturers promo shot of the 1/72 walls.
The box has 24 parts on two identical grey plastic sprues (12 pieces each), which include two gated sections. There are two complete and two damaged wall lengths each 8" long, plus a heap of shorter sections and end caps that can be put together in a variety of combinations. See the pic above.  Looks good in the immediate vicinty of farms and run down buildings. 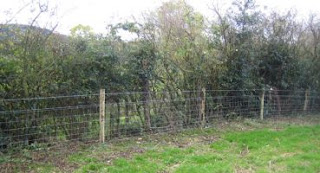 'Pig-wire' fencing
The fields around where we live tend not to be enclosed in a homogeneous way but instead have a mixture of stonewalls, hedgerow and wooden/wire fencing or even open ditches/watercourses. Sometimes where there's a break in the hedgerow, there's a wall or section of fencing. Great opportunity to reduce overall cost (assuming you are making your own hedgerow) but at the same time add some character and welcome hard cover for your miniatures!
A countryside full of walling provides some unique small scale tactical challenges, but also a challenge to your pocket. Luckily, Jarvis sell 'flexi' granite walling strips in OO scale  - £1.25 for a bag of 4 feet. I'm going to buy a couple of packets to try out.

Drystane dyke
It seems a cheap price to pay for some alternative terrain. Add a ruined building or two for a run down croft or abandoned village and hey presto. Of course, we don't HAVE to represent every inch of walling/hedgerow etc on the tabletop, but just enough to give a feeling for it and provide specific areas of cover.
Started cutting up my Britannia HLI. Ouch! They are hard work and it turned out the Glengarry heads are larger than those of Britannia's Cold War BAOR squaddies. The Gelngarries will fit the BAOR torso's OK, but I've decided to try them with Platoon 20's P-B6 Falklands era Royal Marines. 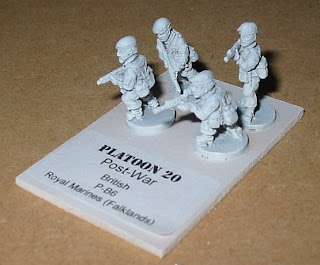 Just an excuse to buy some Platoon 20 when I really don't need any more figures for this project. I particularly like the bootneck fiigures that are 'pepper-potting' with SLR and firing a Stirling SMG from the hip. Maff's had a very positive experience buying Platoon 20 stuff from East Riding Miniatures, which is a good enough reason to send an order their way.

If you wanted to try out your own Winter of '79 on the cheap, use Platoon 20's Falklands' Paras (in helmets) as Government troops, Royal Marines (berets) as Rebels and armed civilians as sundry rebels, militia, SF operators etc.
Cheers
Mark
.
Posted by Mark at 21:42