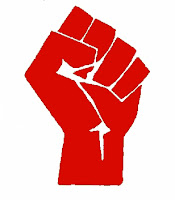 The Armed Wing of the British Proletariat has now declared war upon the so called government of the fascist Thatcherite clique. They do not govern for or in the name of the People. Their only concern is to line their pockets and to stamp on the faces of the Workers from their Whitehall rathole.

The first blows have been struck and we have armed ourselves to take Class War to the heart of the establishment. Proletarian justice will follow.

Workers! Rise up and Bite, Kick, Stab, Shoot, KILL the hand of the monster that doesn't feed you, doesnt pay you and doesnt care for you!


Red is the colour of the New Republic!
We have the guns AND the numbers!
Get on the streets!
ONE FASCIST ONE BULLET!
Issued by

Red Spike Command, for the People of Britain by the People
Posted by Master Chef at 21:31