.
I need more 20mm squaddies like a hole in the head, nevertheless I ordered some Platoon 20 Falklands era Paras and Royal Marines from Tony at East Riding Miniatures (ERM) on Sunday evening. 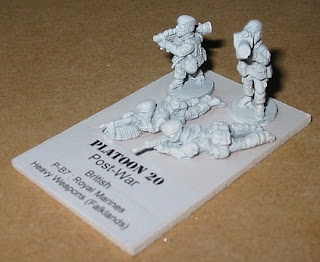 East Riding Miniatures
Platoon 20: P-B7
Tony emailed me on Tuesday to let me know they had been dispatched and the minis popped through my letterbox yesterday morning. This mirrors Maff's experiences with ERM and is the fastest turn round of any order I've made so far for 20mm historical figures. So Tony is ensured of further support from both of us.

I'd been really looking forward to painting them up in DPM as soon as they arrived. But instead of wielding a paintbrush last night, they were such a nostalgic blast for me that I wasted away an hour or so playing with the bare castings, putting them in different squad formations, examining the potential for conversion, headswops etc.

The figures are on a par sizewise with both Britannia Miniatures and Combat Miniatures (ex-Hotspur) from Stonewall, though a little bulker - shows up if placed side by side when they are unpainted but not at all if the miniatures are spread out or opposing forces and I think a liberal DPM paintjob will mask any major differences.

Ordering a Scimitar from Britannia plus a couple of FV432's today. May go for a Chieftain too. Principally because I want to have a crack at the Berlin Brigade urban paint scheme. It's a sure fire way of stamping an identity on an opposing force.