To Hell In A Handcart

The attack on the PM & Cabinet leads to the right wing backlash that was feared for so long. Mountbatten and a group of senior serving and retired Army generals backed by the Parachute Regiment stage a bloodless coup.

The 'junta' issue a message on national TV to "Keep Calm and Carry on....as normal". Some regional authorities enact their civil defence plans. Left-wing councils such as Liverpool and Felpersham declare against the military backed government of national unity. Others such as Bristol, declare themselves open cities.

An attempt to break the strikes at essential utilities and transportation centres using the army escalates into even more tension and violence.  A poorly reasoned order to fire on strikers causes a revolt amongst soldiers who themselves are economic conscripts, who join the strikers. An attempt to restore order and military discipline turns into chaos as the soldiers turn on their officers. 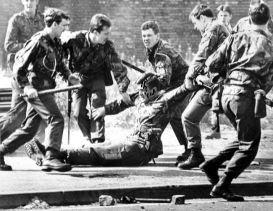 These photos send a shockwave through the country. Some part-time soldiers take the matter into their own hands. Equipping themselves from their TAVR Centre armouries and stores, they take control key local centres and transportation hubs. Spare weapons are used to arm local union militias and self-defence groups.

First blood in the shooting war happens 3 miles north east of Borchester.  A platoon of B Company, 2nd Benson & Hedges Fusiliers (TA) knock out a Chieftain of the Duchess of Duke Hussars. 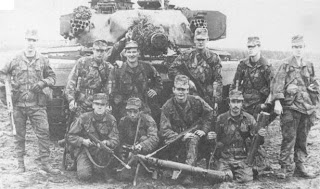 Fusiliers pose with their bagged prize!
'Rebel' troops ditched their berets and donned the peaked combat cap known as "crap hat" with pride after this incident. An article in the News of the World would draw similarities to the cap worn by Fidel Castro so the name "Castro Cap" stuck and became synonymous with 'rebel' forces.