Just thought I'd change tack slightly this evening with a family photo. 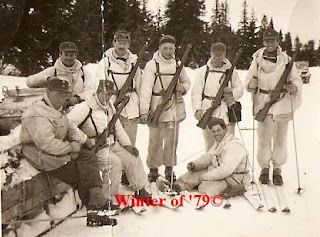 Company Linge
The tall smiley chap on the right is David, my father in law, and I respect him beyond words. Fellows on the left - Company Linge, more commonly known as the Heroes of Telemark. Taken a few years after the war. The Garands were the Norwegan Army's official weapons but Company Linge swapped them on operations for K98s and carried Mauser pistols. They also used German leather artic gear. Loads of German stocks left after the war and it was free! The German leather gear was preferred as it had a hook that allowed the K98 to be carried balanced across the chest whilst skiing.

Recently there has been a lot in the press about 'the big society'. David is the embodiment of this concept. Not because he sets out to get on every committee in the community, but quite the opposite. He just goes out and quitely does his thing.

He tells a story of a plane crash. Oh, there are plenty of stories. Including 2 plane crashes, 3 if we include the original Flight of the Phoenix, the one with Jimmy Stewart (got pics to prove it too). Anyhoo. The transport plane in which he and several other soldiers are passengers, crash lands on the South Downs. Pilot killed, co-pilot badly injured and he and a few others walk away with cuts, bruises and broken bones.

The plane is on fire, they are all injured in one way or another, some still need rescuing. And chillingly, at this point he tells of a hunting party. A full blown toffs an' all hunting party, with guns and dogs, that just swept past them and didn't stop to help or offer assistance. And when Heather told him of Winter of 79. He retold this story again, his face full of memory and said, "Yes, I understand".

Been crazy at work - have been working evenings and right through the weekend. No overtime, just over and above, and likely to continue for a week or so. To brighten things up I've ordered some Booties from Rolf. Fingers crossed they arrive soon. Hopefully, get some time this weekend to play out a quick and dirty skirmish; 'Ty Penn Malo'.