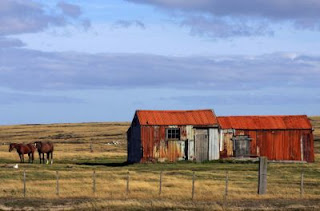 The battle of Top Malo House during the Falklands War of 1982 has always piqued my interest and
I had it in the back of my mind that one day I would  play it out within a Winter of '79' scenario.

I'm therefore grateful to the new Osprey published Force on Force which has Top Malo House as a scenario on page 182 and for bringing the action  back to the forefront of my mind.

I've managed to come up with several variants on the Top Malo theme which I think will be fun to play over the coming weeks. But tonight I'm starting simply with this local set-to in the vale of the Hossack Hills.

George Malo is an Ulster vet. Local legend has it that he's from Romani stock and that during Bloody Sunday, he rode shotgun on a Humber Pig into the midst of the mayhem. There are those who point him out in that famous Daily Mail photo, used at the Inquiry whitewash and simply labelled as 'Soldier X'.

George, lives out his gypsy inheritance at what is cynically known hereabouts as George Malo House.  His 'estate' is in fact no more than a tumbledown collection of sheds, shacks, caravans and rusting lorry shells. But it's the base from which he and a collectiom of gypsy and scrote drifters rustle local livestock and farm machinery within the county.

The present troubles have meant that times are good for George. There is a thriving black market for illicit bacon, ham and the odd spring lamb or two dozen. And this is exactly why the Borchester Conservative Young Farmers have decided to close down George's business.

Led by ex-Etonian and posh regiment short term commission Robin Partrdge-Woodthrush, the CYF have agreed to burn down the property on the night of 26th February. George Malo will be reasoned with, at the point of a gun, and ejected from the county by force if necessary. One or two of the more recent public school members of the CYF are a bit more gung-ho and relish the thought of ridding the county of this 'scum'. Whatever form that may take!

George has 5 armed and 3 unarmed men about the 'estate'. There's a van load of British Hampshire carcasses to get off to a butcher in Felpersham and eveyone is here to lend a hand. A few of the lads will make sure the bacon  gets' to it's destination AND gets paid for, with no funny business.

George himself is heavily armed with a Shotgun, an SLR and a WW2 German Luger. He's also managed to procure an L4 Bren, an SMLE, Sterling SMG, AK47 and a twin bore shotgun for his men.

Partridge-Woodthrush Senior has connections and unsurprisingly the 12 members of the CYF 'commando wing' are fully armed with SLRs, rifle grenades, Sterlings, and a GPMG.