Possibly the most common heavily armed armoured vehicle to appear in our Winter of '79 scenario is the FV721 Fox armoured car (Combat Vehicle Reconnaissance (Wheeled)). 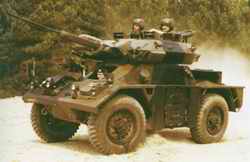 In 1979 the Fox is a sexy bit of kit. Nearest thing you can get to Formula 1 in khaki livery. A 16 ton, 3 man wheeled close reconnaisance vehicle with all-welded aluminium hull and turret, armed with a 30mm Rarden cannon and co-ax 7.62mm mg, and more than capable of 70mph on a good metalled road.

It was not as is commonly reported, a replacement for the Ferret, but did replace the Saladin armoured car. Entering service in 1973 and built at the Royal Ordinance factories in Leeds, the final production run of the Fox took place in 1979.

I knew a TA Fox CVR(W) commander who loved it. He told me it was like "tearing up the countryside in a trial bike". 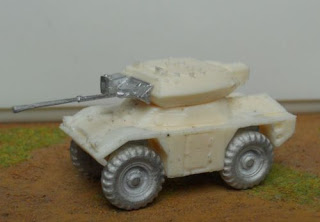 S&S Models: Fox FV721 CVR(W)
master in progress
The Fox CVR(W) gives us a potent armoured vehicle with both a light anti-tank and anti-personnel capability without wholly dominating the tabletop. It can provide support for an infantry force or heavy firepower for a column of light armoured Land Rovers or internal security vehicles such as the Shorland and Humber Pig.

This is a worthwhile addition to any Cold War / Winter of '79 collection.