My favourite from a Winter of 79 perspective is the GRP (Glass-reinforced Plastic) 'Cromwell' helmet. To all intents and purposes a 1970's motorcycle helmet with removable visor. The Cromwell gave the soldier on the streets far more protection than previously, but significantly reduced the soldier's ability to respond to verbal orders or audible tactical clues. Nevertheless if you want a full on paramilitary look to your forces, then the GRP Cromwell helmet is ideal: 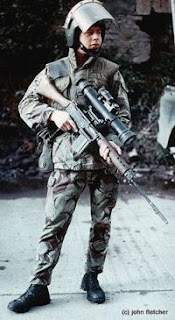 Lessons learned from the Cromwell, were incorporated into the Combat Helmet (Northern Ireland) which appeared in the late 1970's. This was again a modern Glass-reinforced Plastic design and would ultimately lead to the MK6 combat helmet.

GRP Combat Helmet, Northern Ireland: Osprey Elite 044
Security Forces in Northern Ireland 1969-92
I hope you found this short series on the helmets used by the British Army in 1979 useful. You can see that by careful selection of figres you can increase the flexibility and range of miniatures available to you. Once again I recommend Osprey Elite 044 Security Forces in Northern Ireland. If you need just one Osprey title to allow you to paint British Army and security forces miniatures for Winter of '79, this is it.
Cheers
Mark
Posted by Mark at 21:09