.
Never properly thanked Eli for sending me an Airfix Westland Scout for Winter of '79. So here is a very public Thank You to Eli. 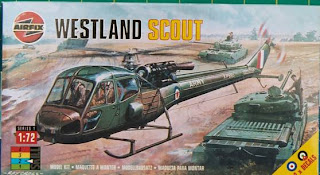 Known as "The Flying Landrover", the Westland Scout was a versatile light helicopter that saw service with the Army Air Corps and Commando Brigade Air Squadron RM, from 1963-1994. In it's basic form it was much used for reconnaissance and border patrol duties. Bench seating in the rear of the cabin allowed 4 fully equipped squaddies to be inserted into 'indian country' and it could also double up  in the CASEVAC or ground support and attack roles.

The basic Westland Scout was unarmoured but it could have a gunner with pintle mounted GPMG in the rear for ground support, or be fitted with 4 SS11 /12 wireguided missiles and 2 GPMGs mounted on the skids. The skid mounted GPMGs were sights were a rudimentary cross made with a chinagraph pencil on the canopy in front of the pilot! Nevertheless, the GPMGs proved successful in operations in both Aden and Borneo. The missile booms and 4 missiles could be fitted in 20 minutes "with rotors still turning" as proved during the lead up to the battle of Mount Tumbledown in the Falklands War of 1982. 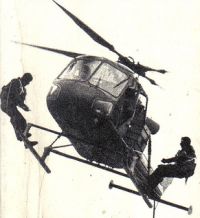 Probably the Scout's most famous role came in the 1982 movie WHO DARES WINS. Perfect fodder for Winter of 79.