Tales from the West Wing 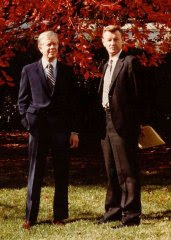 “Hi Zbigniew – help yourself to some peanuts”
“Thank you Mr President; please, read this while I, hey these are good…”
“Help yourself; now this is a transcript, picked up by Fort Meade?”
“Yessir; it’s from Britain and it’s garbled, we think GCHQ tried to jam it.”
“OK, what have we here?”

“…..commanding the Welsh Guards Battlegroup, Warminster……chute Regiment and armour…. all routes blocked…unable to evacuate dependants, women and childr…..accused of mutiny and directed to lay down arms…………..to surrender to summary courts martial……..have refused. Welsh Guards……tradition of service, remain loyal to the Crown and legitimate Governm….

“Zbigniew, I’m alarmed and frankly, disgusted.”
“I know Mr President, emotions are running high over this but it’s best we sit tight.”
“Tight? Tight? But Zbigniew, this is plain, wrong. There’s women and kids over there! Get me that guy, Charlie Bosworth, no, Beckworth. I want a line to Fort Bragg, now.”
“With respect, Mr President, this isn’t the time; let Langley make a run with their Scots Play and then we can run some angles.”
“I don’t like it Zbigniew, I just don’t like it, not one bit.”
Posted by Master Chef at 00:35