Ideal for riots, robberies, revolution, post bomb, Dalek invasion and Zombie outbreaks! Tony has been hard at work creating new easy to assemble, card kit buildings for us at Winter of 79. 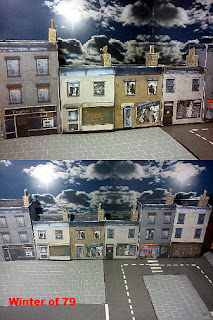 He is just finishing 3 more three storey and 2 more two storey for a total of 10 unique buildings for your urban layout. These have been designed to give the 20mm C20th gamers a no fuss, easy to construct and low cost means of creating inner city British street scenes.
The prices for the URBAN DECAY RANGE are: £10+ £2 p&p for a set of 5,or £20 for the 10, post free in the UK. They will not appear on eBay until after Christmas, but will be available from this week to Followers of Winter of 79. If you would like to order the URBAN DECAY sets, contact Tony directly at the link below.

Card Models
Tony will send out your orders ASAP, usually within the same week, but this will of course depend on demand.I've received everything I've ordered so far with just a vfew days turn around. If you live overseas Tony will do his best to accomodate you with 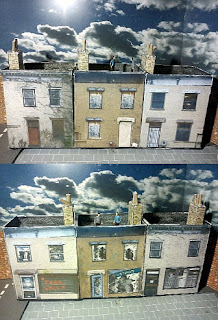 I think these are fun and unlike say Superquick or Metcalfe 'vanilla' urban images, the URBAN DECAY range captures just the right urban gritty feel. Looking at the picture above, there's loads of potential from a back drop for the Sweeney to lift some Geezers, a suspect snatch by security forces, to a fully fledged running street battle between government troops and urban revolutionaries.


With this in mind, Rolf informs me that he is aiming to mould the first pack of 20mm Urban Terror, Britain in the Meltdown civilians armed with SLR (URBMELT SLR1) later this week. It goes without saying they will compliment the URBAN DECAY buildings and vice versa.


Of course you can mix and match with Tony's existing buildings mentioned in a previous post to create a unique and versatile tabletop setup.
Well done Tony! Thank you for your energy, enthusiasm and making these possible.
Cheers
Mark