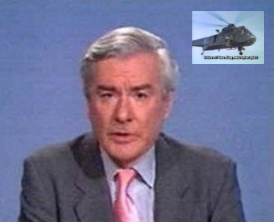 Military operations have begun on the Welsh border this evening. The Emergency Government have made an appeal to the nation to remain calm.

Troops belonging to the Wessex Rangers, 5 Para and 8th and 9th Field Forces are according to official sources, mopping up pockets of rogue army units assisting a small number of civilian insurgents claiming to be part of a Free Wales Army.

A government spokesman has announced that the operation is limited to Abergavenny in Monmouthshire, South Wales and is being directed against known occupied positions. The civil population will remain safe as long as it does not interfere with the actions of the legitimate forces of the Crown.

Gunfire can be heard by Abergavenny Hospital Radio and the first casualties of the battle have started arriving. Evan Daly, a presenter at the station gave us this eyewitness report.


"From our vantage point on the 3rd floor of the hospital, we could see troops and tanks massing on the other side of the A40. Around half past eight this evening the sound of large calibre could be heard from the south and then the first casualties came in by ambulance, private cars and shop vans. It appears the fighting is centred on the village of Llanover. A territorial army volunteer in the Free Wales Army told me they came at them with tanks, were beaten back and came on again.

Businesses and householders in Abergavenny are boarding their premises. I can see barricades are being erected and armed men are on the street building sand bagged positions on street corners".

We will have an in depth report in the lunchtime news tomorrow.