Carry On Up The Meuse! 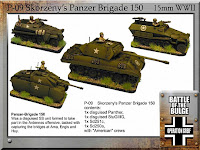 It's not often these days I'm immediately inspired to flex the credit card, but this little beauty from Forged in Battle struck a cord with me. It just says Battle of the Bulge in a box! Add a Schwimmwagen, a gaggle of winterised Fallschrimjager or SS troopers and you have a tasty little 'pulp' force to throw on the tabletop against an equal hodgepodge of thrown together American units that both Maff and I already own.

So we each independently ordered a box from Maelstrom Games (£17.55 less a further 17% off, until 23rd Jan) and begun planning an unexpected winter diversion of 'Pizzabase Ardennes' where the Germans, all Panzerlied and jackboots, are always striking for the Meuse and the Americans are stoically defending Bastogne in a simile to quote the Lion, The Witch & The Wardrobe, Narnia has become a place where it's “always winter, but never Christmas".

'Pizzabase Ardennes' is not meant to be sensible, historical or realistic - just simply an excuse for some fun on the tabletop, in good old fashioned Airfix style! And given that work itself is currently “always winter, but never Christmas" we both need the mental diversion of a discrete 'quick win' fun project.

Maff is off to CRUSADE at Penarth at the end of the month. With no news from Rolf about forthcoming 20mm Argentinian Buzo Tactico for the Falklands Campaign, I've asked Maff to pick up two packs of suitable figs from Stonewall Miniatures - but only after he's checked them thoroughly - cause they can be real dogs! I'd rather not but, hey!

Thanks to Tony at Card Models, I now have Government House and surrounds crying out for some Ungentlemanly Act action on the tabletop, as the Marines of Naval Party 8901 attempt to give their uninvited guests a good kicking.

And until then, it's Panzerlied and stompin jackboot fun in the Ardennes.