Is this the road to Amblève?

Ahead of Skorzeny's Panzer Brigade 150, this party of English-speaking German commandos in American uniforms will be causing trouble for the yanks. You have to agree, best bit of the movie Battle of the Bulge (1965), are the fake US MPs led by nasty Nazi Lieutenant Schumacher, played by Ty Hardin. So, we can't NOT include them in our 'pizzabase' Ardennes wargames can we? 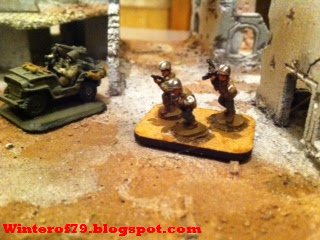 Of course, these figures will also play a turnabout part as genuine US MPs thrown into the line alongside Engineers to halt the German breakthrough. And here are the first Dogfaces, bases still to be winterised. Looks like a scene from the movie already! 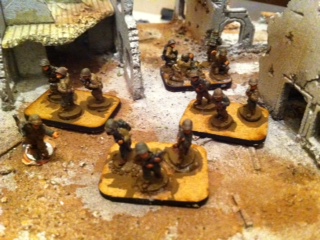 As an aside, I'm currently wondering if we should try some sort of bastardised Infantry Aces mini-campaign to add some depth and character to the games? Will think about that one.

This coming week, back to the Falklands as I paint 20mm Buzo Tactico for their raid on the Govenors Residence in Stanley as portrayed in the film An Ungentlemanly Act.