If you think I just write about a load of rubbish, then you could be right! Inspired by Tony's Urban Decay range of card stock buildings, here's a photo of my first home made 20mm bin bags! 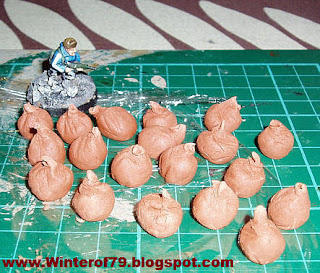 They're made from a lump of DAS Clay rolled into a 1cm diameter ball.  The ball of DAS is then flattened slightly on the cutting mat followed by a pinch to the top and twist. The detailing is done with a cocktail stick. In all, perhaps a minute per bin bag. Some are better than others but hey! It's easy to lose concentration after 10 or so and that's what happened with this batch. Though I'm sure they'll be more forgiving once painted.

The general idea is that these bin bags will be stacked with street furniture or added singly or perhaps in pairs to compliment broken pallets, old sofas, abandoned cars etc. the usual urban detritus of a decayed inner city.

My initial plan, had been to create the body of the bag and then go back once dry to add a knot/tie and/or opening, but I don't actually think it's worth it in this scale.

A couple of piles of bin-bags are in the works but I found it more difficult than I bargained for due to the pliability of the clay or my lack of patience, or both. I'll be going back to attack the problem using Fimo or cheap(ish) Miliput. 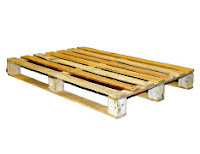 Right! Let's go off and make some ubiquitous wooden pallets, the odd discarded mattress and a worn-out sofa or two!

p.s. Just thought I'd add that the Wheelie Bin didnt come into common use till the late eighties. Households and most shops had steel rubbish bins until then. The plastic bin bag became synonymous with the Winter of Discontent in 1979 when they were piled high on Britain's streets during the strikes.