Following yesterday's post I thought I'd look at what models of the Shorland Armoured Patrol Car were available in 20mm.

The similarity to a Series II Land Rover is no accident as the Shorland is based on the 109 Land Rover chassis, sharing 80% of standard Land Rover components. Originally built for the Royal Ulster Constabulary, they were transferred to the Ulster Defence Regiment and their place taken by the Hotspur armoured Land Rover. The Hotspur having a less militaristic and more classic Land Rover profile.

Back in November, Hobby Den released a 1/72 Shorland Armoured Patrol Car in resin for 6.50 Euros. Also available through their eBay store. 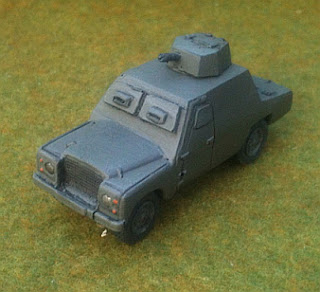 AMC also make the Shorland Armoured Patrol Car in 1/72. Once again it's a resin kit - with huge resin spures/ingates that need to be removed and strangely the body comes in two parts, divided widthways across the middle. The AMC kit is a relatively rare find and I've seen it for £21 in the UK and $40 in the US whihc is a bit steep.A shame because their Israeli armoured car and 'Bambi' armoured car kits would otherwise make great improvised armoured vehicles. 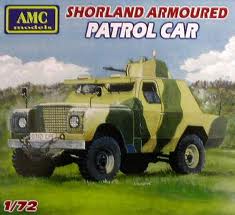 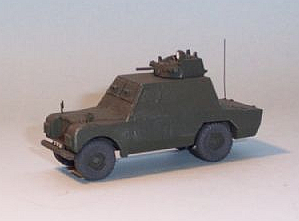 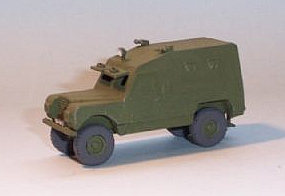 Described as an 'armoured mini-bus' the APV was developed from the Shorland around 1974. It carried a commander, driver and 6 passengers. BW Models make one of these vehicles too (BW31). There's something about the model that makes it look ideal as a tactical response vehicle for Police forces or local militias/Volunteer Groups. In your games, you could even claim it's an improvised armoured vehicle built in the style of the Spanish Civil War 'blindados'.

The Shorland's armour could withstand standard NATO 7.62mm rounds fired from the L1A1 or GPMG at over 47 yards. For more information on the Shorland series of armoured vehicles make sure you check out Clive Elliott's excellent website, shorlandsite.com.