If you are reading the blog and wondering about what vehicles to get, perhaps no more than two, in order to try a bit of Winter of '79 for yourself, then I suggest you take a look at Ellis Replicas for inspiration. 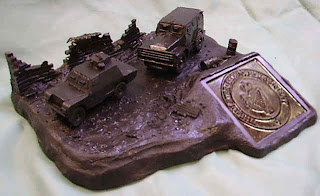 Ellis produce some really stunning 1/60 (around 25mm) replica British Army and security forces vehicles/AFVs, permanently mounted on textured bases.  Like this Shorland Armoured Patrol Car and Humber 'Pig' APC in the picture above. 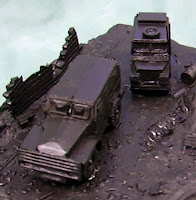 I dunno. There's just something about the groupings I personally gained inspiration from, and led me to start collecting a wider range of British Army vehicles in 20mm than just those more commonly associated with the Cold War. In turn this widened the initial scope of my Winter of '79 collection.

These mini dioramas allowed me to easily envision the likes of the Humber Pig and GRP Land Rover pair or the Shorland Armoured Patrol Car and Humber 'Pig' on patrol somewhere in the West Midlands, on the welsh border, or on the streets of Tooting Broadway. Small scale skirmish scenarios screamed at me from the images, which I will be bringing to life this year.

So, if you want to know where to begin with something like Winter of '79, then the Shorland, Humber Pig and two bricks or even a full Section of British Infantry; and you have your Government forces. Add a GRP Land Rover together with a third brick or a command/specialist element and you have a versatile tabletop force fit  for any number of small actions. Then at some stage maybe tack on an SAS brick, a Westland Scout or Gazelle and Ambridge is yer oyster!