Worked on 12 bases of Volksgrenadiers last night. The figs are mostly Peter Pig's original Germans w.greatcoat sculpts. Nice figs but limited poses and a frustrating command pack where you get three officers, three radios but only 2 NCO/SMGs. To add variety I've mixed in a handful of original Battlefront late war Germans (pre Flames of War). They had been completely forgotten about and suddenly emerged from hiding this week.

These were left-overs from my first 15mm LW German force. Back in those heady days pre FOW you got a box of rifles only from Battlefront and then had to buy a command box that held the officers, NCOs, radios, and light machinegun crews. I bought two command boxes to load my Panzergrenadiers with SMGs, MG42's and a 'bucket brigade' of guys carrying ammo cans to feed the MG42.

Back to the Volksgrenadiers. To further ring the changes, some of the Krauts w.greatcoats have been given combat caps from Peter Pig's very useful range of spare heads. Being Volksgrenadier, I suppose I have to add some Stg44s. I know there's a couple of stands from an FoW Assault Rifle platoon rattling around, so maybe just touch up their bases and leave it at that. 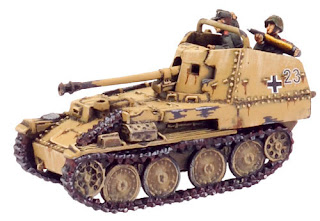 Dug-out my Marders. Sadly Marder IIs, when I really fancy a Marder III h or III m for the Bulge. The 'h' version feels more Eastern Front, so has to be the 'm'. Forged in Battle have a box of 4 Marder III m for £17.55 at Maelstrom Games. Less than a fiver each - but do I really need four?  One will do at a pinch - FOW have a nice one at £6.75, again from Malestrom. Talked myself into it whilst writing this, and promptly ordered one. Oh, if only 20mm Moderns were that easy!

I have a solitary Tiger tank. Not seen much action...... I think time for some whitewash don't you!