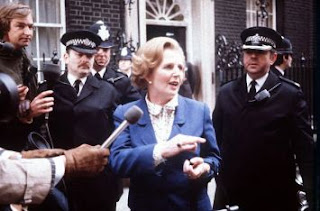 "I am in politics because of the conflict between good
and evil, and I believe that in the end good will triumph."
Margaret Thatcher, PM

Just how do you model insurgency, revolution and civil war in late C20th Britain? Well, first we need a background, be it the chilling doomsday scenario of Exercise Grass Seed, 1966, or as in our case a "Workers United Will Never Be Defeated!" popular reaction to heavy-handed government measures.
"The only effective and permanent counter to a
revolutionary movement is good government......"
LAND OPERATIONS Volume III Counter Revolutionary Operations Part1
The political road map leading towards the tipping point that actually turns industrial unrest and peaceful protest into armed conflict against the state is still  in a state of flux - it's too easy to get mired within the
politics or carried away with creating an unnecessarily detailed background when focus at this stage should really be on the game. However, my thinking has examined several alternative timeline scenarios but ultimately keeps bringing me back here:

Jim Callaghan's handling of the 'Winter of Discontent' towards the end of 1978 leads to increasing industrial protest in the streets of Britain. The Army is brought in to break strikes and violence erupts. A state of National Emergency declared. Conservatives call a vote of  'No Confidence' in the Labour government precipitating the May election in 1979. Conservatives win.

Margaret Thatcher, now PM, decides in a demonstration of strength to show who is in charge of the country. Militant Tendency hard-liners within the Trade Unions shut down critical power stations and bring coal distribution to standstill. Army move in, strikers killed in an accident. Next day first shots are fired. The Queen's appeal for calm is not seen due to a 'power failure' at the BBC. Militants severe the telephone network. Barricades are thrown up across streets up and down the nation.

The government COB-R committee sitting in secret declare that the UK has ceased to be a governable corporate political entity and places the Sub-Regional Seats of Government (SRSG) on a war footing......