.
Perhaps the most iconic military image of the 1980's, was created by the black-clad, hooded and gasmasked SAS troopers who brought a dramatic end to the Iranian Embassy Siege in London, right in front of the TV and camera lenses of the world's press.

Not surprisingly, after a mammoth session playing Call of Duty 4: Modern Warfare, Maff and I have both stumped up for our very own 20mm (ex-Hotspur) Combat Miniatures' SAS teams in 'black kit' from Stonewall Miniatures. 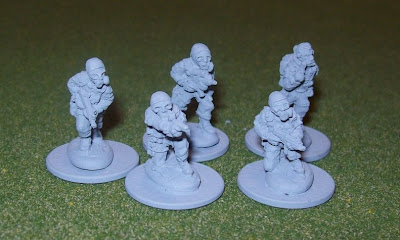 Mine arrived yesterday in a parcel of mixed goodies. My thanks to Mark at Stonewall for a quick & painless purchase. All in all very nice figures. I'm going to buy at least one additional pack from Stonewall to give me three teams - Embassies & Town Halls "storming, for the use of". I also plan to convert at least one of the figures kneeling firing the Browning pistol into a standing firing pose.