.
Gaming at the regional level provides an opportunity within Winter of '79 to call upon LAND OPERATIONS: Volume III Counter Revolutionary Operations (Parts 1 to 3), 1969 (revised 1973). This is the British Army's 'manual' for counter-acting revolutionary and insurgency warfare. 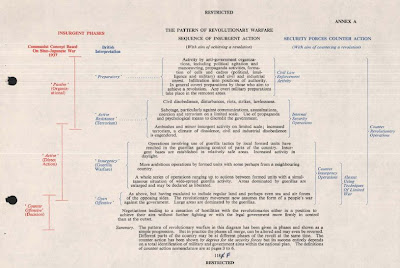 LAND OPERATIONS: Volume III Counter Revolutionary Operations
Part 1 General Principals: Appendix A
LAND OPERATIONS: Vol III lays down what we could call a revolutionary road map - the general characteristics for each phase of the conflict, what actions are most likely to occur and the typical response of the military and civilian authorities. This gives us an excellent blueprint on which to structure our games. At the local level a violent protest, a convoy ambush, or attack on a seat of regional government might elicit a response that pushes the participants into a more aggressive phase of the conflict.