.
I have to admit that Winter of '79 left the ground as a project largely due to Britannia Miniatures range of 20mm British Infantry for the1960's-80's. 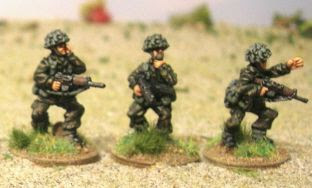 Britannia 20mm Cold War Platoon Command
Photo courtesy of Britannia Miniatures website
These Britannia minis are simply bursting with 1970's/80's squaddie character! I purchased a platoon worth plus some extras and was instantly delighted when I took the figures out of the package. As a result they will provide the basis of most Regular or 1st line Territorial Army (TA) Crown formations I put on the table. 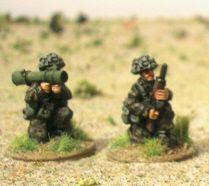 Britannia 20mm Cold War 'Charlie G' team
Photo courtesy of Britannia Miniatures website
What makes them so special? The Britannia Cold War Brits are distinguishable from more modern British troops by their vintage kit. MkIV helmets hidden by loads o' scrim, '58 pattern webbing plus weapons such as the L1A1 Self Loading Rifle (SLR), Stirling SMG, and recoilless "Charlie G" 84mm. Plus you can't get away from the fact that Britannia's sculpting style is perfect at recreating that typical squaddie 'shabby' chic.

With the sad passing of Dave Howitt of Britannia, as of 5th October 2011, this line appears to be on hiatus. Britannia were purchased by Andrew Grubb of Grubby Tanks but as he can't be arsed answering my query about future availability of the BAOR figures, my pounds are being spent elsewhere.
If you fancy getting some 70's/80's Cold War/Falklands era Brits, then the single most useful source on the internet is Forces 80, a living history group dedicated in representing the British Armed Forces From 1978 to 1989.

I highly recommend their 3 part series on Combat Uniforms of the 80's. It's a surprisingly  authoritative overview of British Army combat dress - better than many published works, and a good starting point for anyone interested in the period.