Agony in Llanover: After Action Report

"Griffin One, Griffin One. This is Blue Twelve. Mr Cram is dazed. We are on the touchline. Fly Forwards required urgently!"

"Repeat! This is Blue Twelve. We are on the touchline. Fly Forwards required urgently!" 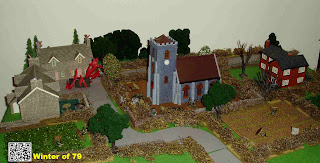 The final moments of Llanovers agony.
The centre of the village is precariously in government hands
"This picturesque Monmouthshire village has escaped the tide of war since 1647 but last night felt the full force of the Emergency Government's attempts to quell the growing fires of nationalist opposition in Wales. All morning, army and civilian ambulances have been ferrying the wounded to field hospitals following a second night of bloodshed".

"One soldier told me, "They popped up everywhere. It was a nightmare, I lost all me mates. Twelve platoon is gone!"  And the surviving Corporal of the Wessex Rangers platoon at the centre of the action said "If they fight like this for one village. What the hell is it going to be like in the cities!"

Butch and Sundance, Free Taff Style!
Have Bren Gun Will Travel
This evening's game represented night two in Llanover. Night one is still to be blogged as the pics are stuck on my smart phone just now. The government forces have got a platoon over the coo' bridge in the dark before it was blown. With no way back they assaulted the village with gusto! Maff's small number of Free Taff volunteers and Territorials held the line magnificently. When I told him a reserve was available - he fully expected a platoon of Royals - only to find 3 miners in windcheaters and donkey jackets armed with SLRs.

'Butch and Sundance' took up position in Mrs Miggins' front garden and held back greatly superior numbers. When the 'Guvvies' got close enough to grenade, it was all over. 'Butch' was taken out by splinters forcing 'Sundance' to make for the church yard and find himself last taff standing.

The action was intense right across the table (I'd removed the 'dead' figures from the road closest to the camera, before I took the top picture). An entire section wiped out and the platoon Charlie G team skulking off table. But it didn't come without cost and a foray from Taffs in the manse was met with deadly fire.

By the end of the evening, the government had managed to ensconce Mr Cram and his sparks, a corporal two riflemen and two GPMG teams in the Church. The rest of the platoon lay dead. Three miners held the house behind Mrs Miggin's (top left) - shooting at anyone exposing themselves in the light of the flames from the burning Land Rover. Sundance had melted into the darkness and two more volunteers were left in the Manse. But the main defence (off table) had been flanked and effectively broken. The road to Abergavenny is open.


The Game
The most demanding game to date in many ways and 50 minutes after the first round, we decided it was time to quit. The Taffs didn't have enough men left to retake the church and the sound of battle would have told the guys holding the southern perimeter that their line had been breached and it was time to head for the showers. A bittersweet victory. 12 Platoon was down to just 9 men at the end of the battle.

The 'Guvvies' were old style Platoon 20. I've grown fond of them in a very Basic Battle Skills kind of way. 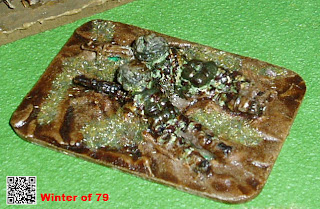 The Free Taffs were a mix of ex-Hotspur for the volunteers and RH Models Brits for the Territorials. No prizes for guessing what rules...Cold War: 1983.