We interrupt this gripping 1970's saga...... I found a set of  1/72 scale 1970'ish furniture on eBay from a European company called Lone Wulf Miniatures. Thought it was perfect for adding a bit of 3D depth to Operation Pantheon style house raids or impromptu 'cover' on the streets. 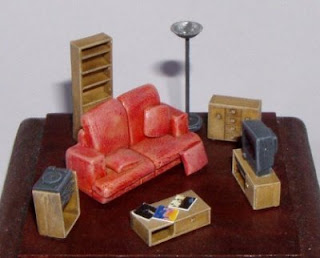 Comes on a sprue. Very nice, crisp, clean casting too! Quite impressed. Nothing you can't make yourself with plasticard and some Green Stuff to make the sofa but coming in less than a fiver including postage it takes all that bother away. Not done anything with it yet, so here's a promo shot I found on the interweb.

Looking around for additional items to supplement this purchase I found more 20mm WW2 orientated furniture at C-P Models (TQD Castings Moveable Objects) and Frontline Wargaming's Blitz Bits. If you know of others please let me know. 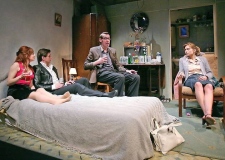 If you are looking to repeat this yourself, don't worry about the age of common items such as wardrobes, chests of drawers and comfy chairs. Despite being WW2 era, older furniture styles survived through the seventies and beyond in flats, bedsits and even family homes, often mixed with newer styles.

Still with me......? Right, I have created some CQB house clearing rules for Cold War: 1983 and now running them through the USEME Modern Warfare blender to see how they fit there.

Now you may have been thinking that the Kebab House drama has just been a lame effort at amateur writing? Far from it. The Tate/Kebab House storyline has propelled us back into the miniature world of 1979-80 Britain with gusto. Inspired, I've taken an old set of my own rules - The Odd Angry Shot and 'lifted' them to become a system from tracking down Rhodesian guerrillas in the bush to running a manhunt on the streets of London. But you know, now I've opened pandora's box with The Odd Angry Shot, I'm keen to get back to some bush warfare skirmish gaming as a result.

And then at a very natural point in the gaming story surrounding the Grey Cortina - which I still need to blog up - it seemed only natural to utilise the original system for a police car chase in the best traditions of Police Camera Action "Right! Right! Right!"