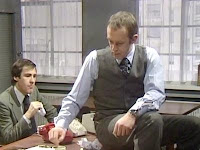 TV Commentary:   "In response to shots fired inside the besieged premises earlier today, armed police supported by specialist Army anti-terrorist units have stormed the flats above the Kebab House where terrorist leader and wanted fugitive Alan Tate, who together with an unknown number of others were holding two confirmed hostages.

At approximately 2.40pm this afternoon, explosions rocked the building. Glass and debris cascaded onto the pavement below. Shots could be heard as smoke and flames began to billow from the 3rd floor windows.

10 minutes later we could see one of the hostages, thought to be Miss Galina Vankov, a 24 year old student caught up in the siege drama, being led out by black clothed armed police and taken away in an ambulance, escorted by police cars with flashing lights. The upper storey is clearly on fire but the police are preventing fire crews from putting out the blaze......."
Roy: "Right bloody mess."

Roy: "I'm not counting our chickens until I see him on a slab or his teeth in an envelope. They should have waited and let us send Special Projects in. This inter-department rivalry has got to be stopped if we hope to end this thing.

Anyway, we need to get our hands on the girl."

Tom: "I think SIX will probably be sitting on her for some time before handing her over to FIVE. We won't get a look in for weeks, possibly months, if at all. Especially if Tate is off the slate."

Roy: "Tom, start the ball rolling. Show we mean business. Then get Carter on it. Tell him to use blackmail if he has to. We've got plenty on everyone concerned...... I've got a job for you in Glasgow. You'll need Jim and Special Operations for this one."

Tom: "Glasgow eh? I thought for a moment you were sending me to Wales. Doing the Beacons once is more than enough in a lifetime".

Roy: "There's a big operation planned. Special Forces, ours and theirs, are running around having a field day at the moment. Can't risk a blue on blue."

Roy: "I don't. Glasgow may put a huge dent in their hierarchy. Now the girl?"

Phone rings. Tom answers and looks at Roy. There is a clear unspoken message between them. Standing to leave Tom nods and acknowledges, "The girl."

Silently, Roy sits back down in his chair and slips a Met traffic report about a grey Cortina into a manila folder marked TATE before dropping the whole thing heavily into his desk drawer. Pressing the intercom, "June. More tea, and bring in the Glasgow file."