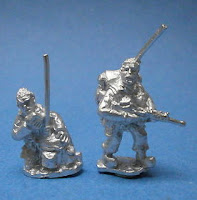 Been a victim of my own success at work. Taken on Business Intelligence and Sharepoint in addition to the online HR Portal. H suddenly became ill too and at one stage we feared for her life, but she's safely in the hands of the medicos and we expect a successful conclusion. All leading to a very quick shift in gears, as you might expect, and wargaming has once again taken a back seat.

Still, managed to grab a day off today for some R&R and to just STOP. May even get back to my Winter of '79 workbench this weekend.

Meanwhile, Rolf at RH Models (Liberation Miniatures) has been beavering away at his usual eclectic release schedule, bringing out several new packs suitable for Winter of '79 and more.

Rolf will be at Warfare in Reading on the 17/18th November. If you are going, pop along and say Hi from me. I'm particularly looking forward to the SAS with SLR (SaSFalkFN) and civvies with G3 (UrbG3) becoming available and those SAS signallers (SaSFalkrad) plus civvies in '44 helmet with SLRs are definitely on the shopping list.

Over the past while, I've been buying my RH Models via Pumpkin Models on eBay and thoroughly recommend him as an eBay trader.

Feels good getting back to the blog!