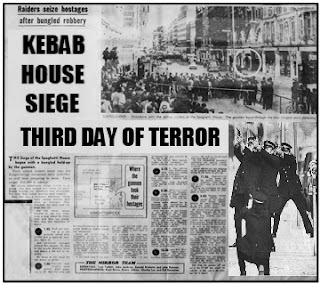 The News of the World can reveal that Police officers searching for Mad Trot Alan Tate, ran him to ground at the very moment he was undertaking an armed raid on the King of Kebapche Kebab Takeaway in Tooting Bec on Wednesday.

In the ensuing shootout which saw innocent shoppers scurrying for safety, heavily armed police attempted to arrest and apprehend Alan Tate and an unknown number of accomplices. One police officer and shop owner Petar Bukowski, 35, were mercilessly killed by Trot gunfire.

Heavily armed police quickly surrounded the building, sealing off Tooting Bec and soldiers erected barricades, checkpoints and searchlights facing Tooting Broadway to prevent interference from pockets of Popular Front diehards still thought to be at large in the area. Shops and homes on either side of the property were hurriedly evacuated.

Tate is forcing attractive hostage Galina Vankov, 24, a student at the London School of Economics, to negotiate with police through a third floor window. Though visibly shaken and operating to orders being given from inside the barricaded upstairs flat, Galina has pleaded with police for the safety of those inside.

Police are appealing for witnesses to the whereabouts of a Grey Cortina, whiplash aerial, racing trim, seen leaving the area at sped shortly after the shootings.


We'll unravel the real story behind the siege and aftermath over the coming week.
Posted by Mark at 10:08