Deep space station Alpha Prime is the biggest dive on the fringe. In Loading Bay 71 a deal for Irradiated Meths goes sour, leading to the Zoly and Moskau gangs facing off against each other in a heated exchange. 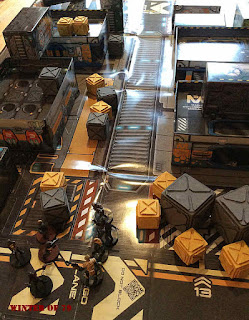 A few photos from a 28mm Sci Fi game played out on Infinity Moto.Tronica pop up card terrain last weekend. I was aiming at a Mass Effect feel and kept things simple to keep the tempo going. 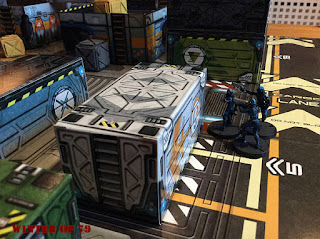 Alpha Prime Security - The Sec' are as ever, on the ball and have been monitoring the transaction. Lt Diz-iz-Poliz leads two strike teams of armoured Sec Troopers from Antenociti's OOP G.O.T. range into the loading bay. 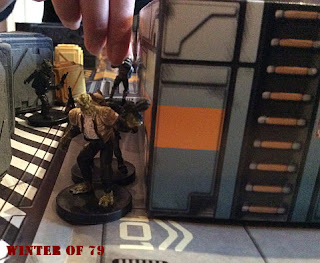 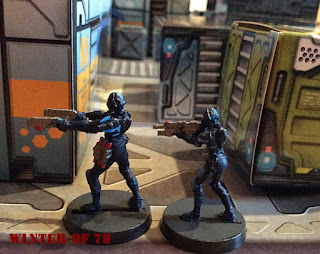 On the appearance of the "Tinned Fuzz", all enmity between the Ir.Meth gangs is instantly forgotten, or put on hold at least. They disperse to hide behind power modules on either side of the main drag whilst they work out their next move. Yes, those are re-roled Star Wars miniatures! 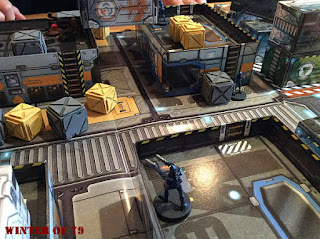 The Sec. decide to hold a line with one team and take down the perps when they break cover. Both sides vie for the high ground. Note that the grey and yellow crates come from Karl on eBay. He has a great selection of reasonably priced, home made Sci Fi crate/storage scatter terrain.. 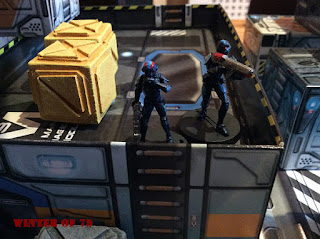 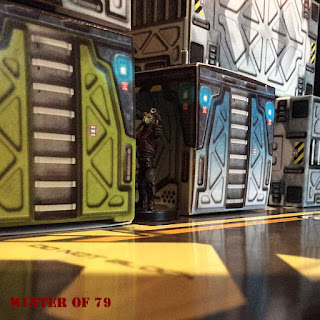 But there's still plenty of room to hide! 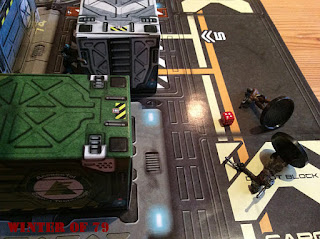 Pacification has been achieved

Moskau and C'atsheet, a henchman, manage to sneak right round the table, completely outflanking the Sec. troopers and make a final dash to the exit. One Sec. trooper, Bill 47, left as a back stop, blasts both Moskau and C'atsheet with the best shooting of the game, which up to this point had been more akin to the Stormtrooper Shooting Academy! Result!

The Moto.Tronica terrain whilst a bit garish was stunningly effective for a product worth less than a tenner. And it folds down again if you are limited for space or want to take it to a pal's for a game. There's a new version currently available in the U.S. now and another will be available for pre-order soon. However on it's own the table would still have felt bare. The additional scatter terrain made a big difference in both look and fluidity throughout the game.

Right! The undercoat on my Winter of '79 figures should be dry by now...