Power To The People! in 20mm

Yes, the revolution is on! Wayne Bollands at Wargames Illustrated contacted me recently and asked if I'd like to write a wargamer's guide to Winter of '79 for inclusion in the magazine later this year. Can't tell you how chuffed I am to be asked, especially as it came at a time when I had just opened this new chapter of my life. The result has been a welcome boot up the bum to get a move on!

I'd like to introduce you to our new protagonist and erstwhile protector of the people, 'Badger' Smith of the Tooting Bec Popular Front! 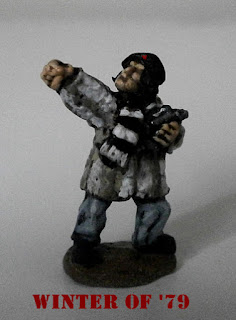 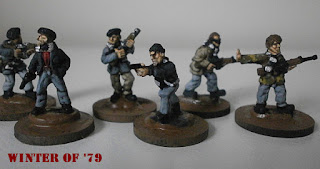 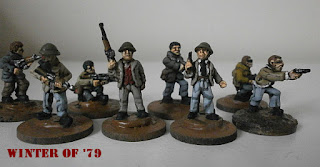 All but one of the figures are 20mm from either RH Models or Platoon 20. Most were straight forward head and/or weapon swop conversions. I love doing these conversions as they add that little bit extra character that's out of the norm. The Tooting Bec Popular Front all sport Fulham FC scarves made from Green Stuff.  Whilst 'Badger' himself saw me adding lashings of Green Stuff to create the Afghan coat, long hair, raised fist and finally scarf to an Urban Meltdown figure which had been given a suitably selected beret head taken from a Falklands era figure.

Mark Griffin of Pumpkin Models has helped me out with the painting. Mark is a great guy and in this case, the brief I gave him for the miniatures was for '70's urban chic'. Greys, muted colours, jeans/denim and either German Army combat jackets or Italian/Portuguese camo jackets - both of which were readily available in most high street army surplus stores at the time. I think he's done a great job of interpreting my wishes, don't you?

The photos above were supplied by Mark and represent work in progress to allow me to correct anything before varnishing. In this case I'll be finishing the basing myself with an urban theme. More to come.