You can't park your tank there!

No need to be alarmed "Worried of Wordsworth Avenue". The forces of Law and Order have been recruiting........ 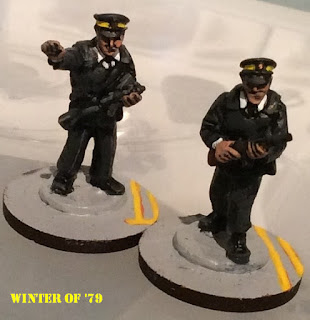 The Emergency Government announced today that all Traffic Wardens would be subordinated henceforth to the new National Police Service. They would receive additional powers and training in the use of firearms. It is expected that they will accompany and both police and military personnel and aid them in carrying out their duties.

A spokesperson for the National Police Service said that this step was "an important contribution towards protecting lives and property".  In other news.....

Got these figures finished today and wanted to share. The photo doesn't show the nuances very well but I'm pleased with how they turned out. I painted the Traffic Wardens with Vallejo Black Grey over the black Gesso primer, leaving plenty of the black showing through as shadows. Citadel Fortress Grey was then applied with a small brush and very light touch to prominent highlights.

I toyed with the idea of giving these figures overcoats by extending their jacket skirts with Green Stuff, but to be honest, in the end just didn't think the effort was worth the final result. And BTW, there should probably be a yellow crescent flash on their shoulders with the words Traffic Warden in black, but the yellow hat band and double yellow lines say it all in 20mm, in my opinion.


For info, the female officer in BAOR14 can be used as a Traffic Warden too, as that style of cap was used into the eighties, at least in London.