Got my mojo on so grafting today, prepping more miniatures for Winter of '79. By far the majority are destined to have an urban focus.

There's a sprinkling of ex-Hotspur civvies but otherwise all the figures shown here come from Matt at Elhiem. Civvies in the back row, then armed Police/RUC/MP, front left; and finally, a group of BAOR01 squaddies on their backs having a quick fag break, front right. The latter waiting to have their helmeted heads removed to be replaced with 'crap hats'. 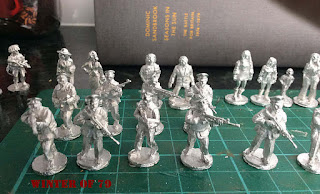 If you haven't seen them before now, there are three packs of Police/RUC/MP types in Ehiem's Cold War, BAOR range. These are BAOR12 with Stirling SMG and SLRs; BAOR13 with M1 Carbine, G3 and Mini14; BAOR14 with pistol, sterling smg and female officer.

BAOR12 is the strongest pack. Luuuverrrly miniatures who simply look the biz. The officers with pistol and Sterling in BAOR 14 are also great characters.

What are they like? Female officer aside, all the Police/RUC/MP figures have peaked caps, service jackets, flak vests, sidearm in holster and a hand radio suspended from their left hip. A couple have their trousers gathered into boots, the rest loose. Shirts and ties are also visible, which puts them more into the Police/RUC camp than military.

From a Winter of '79 perspective they could easily represent British Police in an urban uprising envelope. In 1981, D11 was issued with the L1A1, various gas guns, grenade launchers and baton round dischargers 'just in case' due to the rise in public disorder in the first years following the Conservative election. From the latter part of the seventies county and city police forces around the UK created their own versions of the Met's now infamous Special Patrol Group.  There's nothing to say you wouldn't have seen them coming down your street in our alternative 1979 and therefore add aanother  dimension to Winter of '79 games.

The heads look like they'll come off quite easily, so if you prefer to represent D11 specialist firearms officers, armed security, private army or other pseudo-military organisation, simply glue a mix of beret/bare heads in their place. 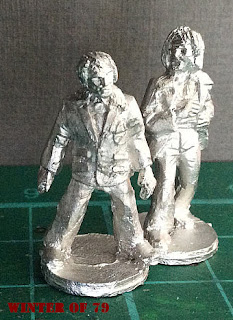 HIP03 1970's Style Teen/twentys Males has three figures. Very nice as bystanders, dickers, or unarmed players. However, maybe it's just me, but the two pictured above really look like they could pass for Reagan and Carter from The Sweeney. Wouldn't be hard to give them firearms either.

Anyway, time to get back to the grind!