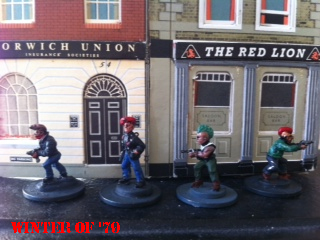 .......If we don't stand up, be counted and take a stand to say "up yours johnny punk", a tide of bile spewing, pogo dancing, safety pin fondling, unwashed yobs will swarm into the dreaming suburbs and spit upon your aunts goldfish while the poor silver haired dear looks on, clutching her dead budgerigar to her bosom. Do you want that? Does anyone? That's why today, I, you, WE say, "Take this punk scum. We are arresting you under Rule .303, trying you under Rule .303 and putting an end to your anti British, punk rock, Trot evil, under RULE .303!"