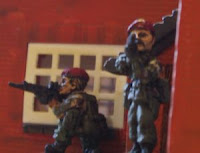 What's the appeal of Battlefield Evolution: Modern Combat; even at 99p, beyond that car crash, rubber necking element. Was it worth all the hype and subsequent hoo-haa when the pre-painted plastics went down in flames?

And it could have been. having had a chance to look through the game, I feel that it wasn't just oversold but wrongly marketed and that Stalingradlike denial turned it into a mockery. But that's all water under Mongoose's bridge.

As a dyed in the wool, "I want to be down in the trenches and bleeding with my miniatures" type of  C20th gamer - Battlefield Evolution should be the complete antithesis of what makes me tick. But what I have found is a slick' game system with just enough chrome in the right amounts that could have given Mongoose, Warhammer Moderns on a plate.....could have.

So, what I am saying is that Battlefield Evolution is a very useful addition to your gaming arsenal. It's easy to learn, relatively slick to use and encourages play. For instance, movement is unfettered by short, described elsewhere as "retardedly short", weapon ranges. All too often other games, including those I've personally sat in, become bogged down by long range fire, or rather, the fear of long range fire. This encourages a 'Panzerbush' mentality with clumps of figures hiding behind hills and trees, maybe taking the odd potshot trying to get that lucky hit. The effect is similar to the scene in THE HURT LOCKER, where the IED team come across an SAS patrol and both have to take cover in a wadi where a long drawn out sniper dual takes place. Realistic - possibly yes, an enjoyable game on the tabletop after a hard day at work - no.

Maff and I were discussing a new (for us) gaming concept recently. Instead of spending hours maneuvering across a table, we started the action at the crucial point of decision and then moved straight to the next point of decision - we called it 'pizza base' gaming. More anon if you are interested. Battlefield Evolution has you moving fast across the table in order bring you into face to to face combat and thus create decision points quickly.

There's no morale. Now be honest. Have you NEVER played a game where you've dropped the morale rules to speed up the game - or perhaps made decisions about morale based on your experience of what is likely to have been the outcome? Battlefield Evolution is about playing and having fun in a way that reminds me strikingly of playing Ghost Recon, GRAW and Call or Duty: Modern Warfare on the XBox. It's the adrenalin rush, the action. Are these console games any less enjoyable because there's no morale check?

There's an inherent honesty about Battlefield Evolution as a game system that promotes play. It's not for everybody. It's not for every gaming situation. Does it have a place in Winter of '79? It doesn't fit my vision as such, but I'm prepared to give it a go, especially for larger urban games.