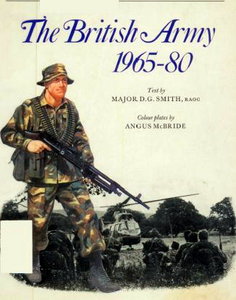 It's really little more than a list of regiments and cap basges with a briefest of overviews of uniforms. If you see it for a pound or two on eBay, go for it - but pay no more than £2. Personally I think the DPM represented in this Men-at-Arms title as too 'yellow' but I've found this to be a regular conceit amongst illustrators. Back in the late seventies I used the figure on the cover of the book to paint my Airfix 1/32nd scale Modern British Infantry - lovely models.Shame Airfix made no opposition or made these in 1/7nd where they would at least have had a Chieftain and Scorprion/Scimitar to go with. A simple but all too non-existant marketing strategy. Airfix 1/32nd Modern British Infantry
Production 1977-1984
A Call To Arms should be releasing 1/72nd scale, yes 1/72nd scale, Modern British Paratroopers later this year, equal in quality to the larger OOP Airfix British. Not surprising as they are based on Britains 54mm SuperDeetail British Paratroopers from 1978, in Combat Dress, '58 webbing and berets. A preview of the full sprue with 8 diffrent poses is available at Plastictsoldierreview.com.

With the success of Warhammer and the like if I were in charge at Airfix I'd use the masters for their 1/32nd  ranges to make boxes of 28mm figures. Rant over.