Figure on the left represents a slight change to my planned snatch squad. This guy represents a 'hero' who has had his helmet/Glengarry knocked off in a scuffle. Figure on the right is 'Brian' Footie supporter, plus it's winter remember and a little chilly- hence the footie scarf. Had to rebuild his left hand completely. As he is an urban meltdown civvie type - he doesn't know how to hold the SLR correctly.  Has probably forgotten to take the safety off too! And I bet the gas regulator set higher than 3! 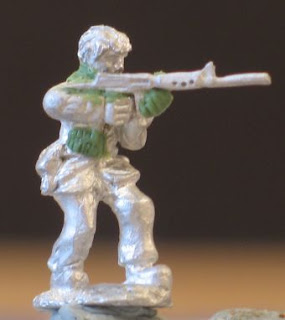 The head came from the (RH Models) Aussie NAM SAS. They have a very seventies look about them and this gutsy fella looks like Gareth Hunt. Not too shabby eh?