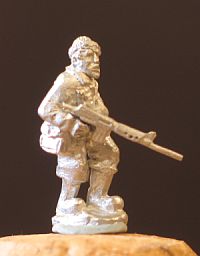 Started on my 1979 Trade Union militia yesterday evening, but Maff rang for a wargames chat, so two large bottles of beer later....called it a night.

The figures are RH Models (Liberation Miniatures) - civilian dress, AK47s and woolly hats - for all the world they look like they are wearing Donkey Jackets and so are perfect for representing manual and blue collar trades. The Mono may have been the 'uniform' of the Trade Unions in the Spanish Civil War, but in my 1979 Britain it's the corporation Donkey Jacket!

I'm slicing, be honest..... snipping, hacking, carving,  the AK47s off the original figures and replacing them with suitable modified SLRs. You can't see it in the photo, but the rifle is tilted slightly to the right. This adds some subtle character to the model. If I find another figure in this pose, I'll have him carrying the SLR across his waist.

Whilst talking with Maff I was absent-mindedly toying with an Indo-Pakistan Bren Gunner from Elheim, and thought - aaaah, I can cut off the Bren LMG and give it to one of the TU Militiamen..... the Elheim Bren is very nicely executed and thankfully equally easy to remove.

To increase the turn-out of the branch, I'm going to add SLRs and the left over British helmeted heads (with and without respirators) to the GDR Workers Militia bodies left from yesterday's head conversions.

Now, will I ever get some suitable Sterling SMGs for my Trade Union Executive (local branch), 'shock troop'?


"Then raise the scarlet standard high.
Within its shade we'll live and die,
Though cowards flinch and traitors sneer,
We'll keep the red flag flying here."
Cheers
Mark
Posted by Mark at 10:15