Following on from my previous post, I thought it was a good opportunity to also show the male armed civilian packs from Tony at Platoon 20.

Platoon 20: P-CV1
The figure on the left is one of my favourites in the Platoon 20 range. His late nineteen seventies, early eighties moustache and coiffure just rocks. There's something about his authoritative build and stance that makes him a powerful character on the tabletop. I see him as armed pub landlord, an SAS commander in the style of 'Colonel Dempsey' commander, local industrialist etc. Ideally for Winter of '79 he should be armed with an SLR, Sterling or double-barrelled shotgun - nothing insurmountable. Best way to paint him as I see it, is with a country large check tweed suit and a deep wine red waistcoat.

Next along is the figure in dinner jacket bow tie. Not many dinner jackets on the front-lines of Borchester - However, in Midsomer Murders and the like, there's very often a professor, college don,  or antiques dealer character representing the local village intelligencia- and their 'uniform' is is often a check jacket, pastel coloured shirt and bow tie. Voila! Professor Plumpton ("in the Library, with a Sterling submachine gun").

The guy with the glasses is an enigma - well not quite, I have plans for him. But you can always paint him with 'Michael Caine' clear specs rather than sunglasses. 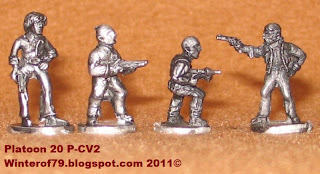 Platoon 20: P-CV2
Now, this pack is a mixed bag. The figure on the left is very much a disco-dude, taller than the others, more LA than Lewisham. He's neither Sweeney style criminal or Rozzer. The figure in boiler suit with stocking mask and sawn off shotgun - "you're goin doooown"! Then comes a skinhead with M3 SMG. Finally, a decent figure in denim jacket and pistol useful as cop, robber or revolutionary.