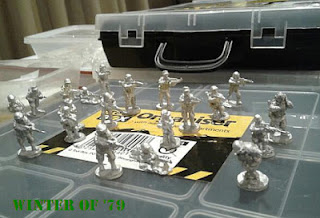 Saturday didn't quite go to plan. Well, not my plan at least. Up early and off on the annual odyssey to find the perfect Christmas Tree. If you have visions of the Griswold Family Christmas Tree, not far wrong. We returned with a seven foot monster that the King of Norway would be proud of.

I started converting some more Winter of '79 figures this morning but lost the thread amongst the household chaos being wrought by the tree, lights, baubles and general melee of festive decorations. Following a small intervention...I settled back down and switched to a box of spare Call of Duty:Modern Warfare figs that needed cleaning and prepping. In this case Wartime Miniatures, Modern Russians. They were originally bought with the intention of creating a Desanti force for Battlefield Evolution: Modern Warfare, supported by S&S Models' BMDs and T64Bs.

The Call of Duty:Modern Warfare spares box also had a pack of Liberation Miniatures guys in bandanna with AK47, cracking figures, and some MJ Figures Mercs with AK47. I picked out the best of both. Some bandanna guys will be slid into the Desanti force above but the rst along with the MJ Mercs, will become local Caucasus militia/rebels with a track/shellsuit look. Need more RPG! 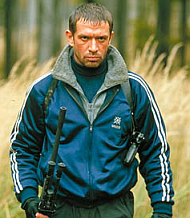 A few Liberation Modern Russians with caps and SVD/PKM were lurking and are now going to join the Desanti, but I removed the heads from the figures with AKs for future use elsewhere. 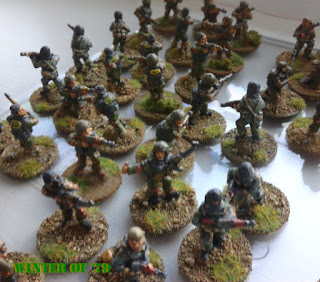 All in all, the Russians proved to be a welcome distraction. But back now to my Winter of '79 conversions.