As I had the mobile handy, some of last weekend's conversions still on the workbench. First, my Para commanders. The figure I'm holding is a Britannia BAOR platoon leader with head replaced  from a spare Liberation mini and given a hood from Green Stuff. The two commanders on the cutting mat are both Liberation helmet command with heads nicked from beret toting riflemen. 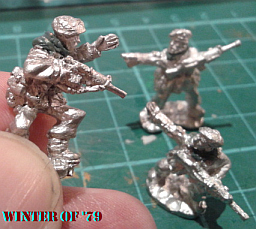 Next up, the Taff Guards GPMG conversion on an MJ Figures Tom. The GPMG came from a Britannia half figure that's included with their open top FV432.

Update: Unfortunately, they are part of a large number of figures sent to Mark Hickman in Dorset to be painted which were never returned. 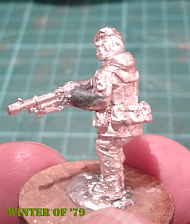 I cut off the GPMG at the wrists of the doner figure, leaving the hands holding the weapon. Then cut the SLR off the MJ recipient at the wrists, leaving the butt tucked into the arm. The dry run produced an almost perfect fit. Once glued, I applied a 'sleeve' of Green Stuff to hide the join of the GPMG breech and new butt. Now build up the cuff and forearm of the left arm. Done! Easy way to fill a gap in the TOE and create a nicely dramatic figure to boot.