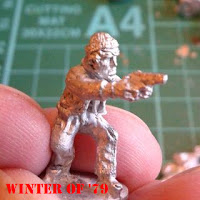 Over the past two years I've picked up four packs of  Armed Civilians/Terrorists (P-CV1) from Tony at Platoon 20. and set myself the challenge to make the four base figures as different as possible with the minimum of effort.

Sure, pushing the putty you can give them different jackets, different weapons etc, but sometimes, simple works.

Playing around with the figures in this classic pack, I've found that just taking the heads off and repositioning them makes a huge difference to how they look. whilst a simple headswop creates a whole new figure.

Best figure of the bunch is probably Man in zipper jacket, firing 9mm Browning HP pistol, two handed. He is an incredibly versatile miniature. A beret and he's a Spanish Civil War International Brigader or a 1960's Latin guerrilla. A balaclava and he's SAS or 70's terrorist. In this case I've given him a Liberation Minis head with knitted hat to create a more Geezers' blokey look.