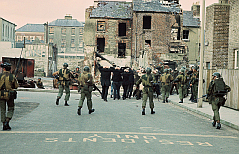 It was all over in Abergavenny by early yesterday evening; the little historic Market town a sea of rubble and destruction after a bitter assault led by 5 Para and the Wessex Rangers ground into the town over several days fighting.

An armoured push up the high street was stalled by a rebel anti tank gun and molotov cocktails with burnt out Land Rovers and a Scimitar tank blocking the road. The wreckage of a Westland Scout was still stuck on the roof of the town hall where, apparently members of the Special Air Service Regiment assaulted by helicopter to clear rebel positions room by room.

Security is tight and few of the government soldiers were talking as they consolidated their positions. One Ranger eyewitness said "Bodies litter the street in front of the Town Hall. The main staircase is a bloodbath". Another said "we'll keep a welcome? They can bloody keep it"; others just stared at the smoke wreathed hills "two battalions, one town" said an exhausted Paratrooper, "you work it out".

Welsh sources have been quiet though there are rumours that councillors in Pontypool and Merthyr are considering declaring themselves open cities to avoid the damage inflicted on Abergavenny and there are reports that rebel cadres are moving on town halls to secure them.

By this evening three column of lorries, new Saxon Internal Security personnel carriers, tanks and landrovers were are pushing towards Brecon, Pontypool and Merthyr Tydfil.

"we have advantage and we are going to play this to a grand bloody slam" said an officer as his army Land Rover headed west along the Heads of the Valley Road.