Stung by the Wessex Rangers' attack up Lion Street, The Free Taff have launched a blistering riposte. I've spent the last day trying to make sense of the shambles it's left in it's wake. But more of that later in the week.

Have had to concentrate on a job application, so no time to pull together the AAR. Application fired off, so below is one of the best photos just to keep you ticking over.

What we have, is first part of 5 Para Recce Platoon entering the action. You can see Free Taff in the foreground and on the roofs. The guy casting a big shadow is Gaz "two mags" on the roof of the Town Hall. 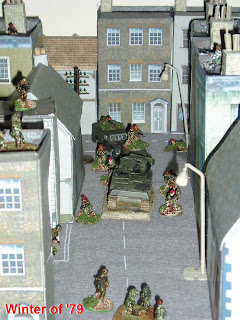 Some late night thoughts and ramblings..... the 2'x3' grey felt cloth I bought at Hobbycraft proved to be a quick and flexible urban gaming mat. Heather had some Tailor's Chalk handy that allowed me to run up the road markings. Tailor's Chalk is easily erasable leaving no trace the next time you want to game with a different street layout. Her chalk pencils didn't work on the felt, but the old fashioned Tailor's Chalk wedges were brilliant. After finishing the road markings with white chalk, I went back over with the yellow chalk wedge to do parking lines, but it looked too fussy. Quick rub with my thumb - gone!

FYI, the streets are approximately 8cm wide in this game - and it works. For me, anything wider really would start to need pavements and street furniture to look ok. Through trial and error, I've found that a static layout needs roads 10-12cm wide to allow for parking on either side, bus stops etc, plus 2cm wide pavements minimum. 3cm wide pavements look better for inner city shopping areas.

I originally thought the main focus of urban gaming on my smaller card table would be lengthways, with a couple of long fields of fire intersected by other roads at various angles. But what has come out of this game and a couple of smaller inner city bun fights, is that small works best. Instead of playing the length, play the width of the table (2 foot) and use the length to expand the dynamic environment for gaming with plenty of side streets alleyways and service roads.

If you have one or two long boulevards, street furniture is important for your guys to hide behind - the pillar box, dustbins, rubbish skips, parked cars etc. However, if the side streets, corners and alleyways themselves become the cover, you only need a few token items for urban colour.

I particulary like the flat roofed town houses. Not only do they provide an extra vertical dimension to the battlefield, you can easily place troops on the roofs - and believe me those chimney stacks are great for hiding figures behind. More than once I forgot the troops were there! And of course they can also be used to represent troops inside and moving through buildings. Then mix and match with more conventionally angled roofed buildings and you get a more interesting look to your urban tabletop.

A funny thing worth mentioning.  You might think it matters what buildings go where, but with the exception of the objective building, in this case the Town Hall, it actually didn't. I think that's testimony to the balance of the game was right. The terrain being there to support the game, not be the focus of it.

I know that I shouldn't be amazed, but I always am with this type of game, how a couple of dozen figures a side and half a dozen vehicles in total, can seem like hundreds. Great for a gamer on a budget or who like me, who has a limited budget and whose interests are also split between different wargaming projects at any one time. Consequently I'm downsizing my civilian and para-military factions as platoon sized formations really aren't needed, which in turn means less conversions required (phew) and I can get them onto the table quicker. I can always throw in some of the more rabbley military or GEEZERS criminals and detective figs to bulk them out where necessary.